A tattoo is a marking made by inserting indelible ink into the dermis layer of the skin to change the pigment. Tattoos on humans are a type of decorative body modification, while tattoos on animals are most commonly used for identification or branding.

Tattooing has been practiced for centuries worldwide. The Ainu, the indigenous people of Japan, traditionally wore facial tattoos. Today one can find Berbers of Tamazgha (North Africa), Māori of New Zealand, Arabic people in East-Turkey and Atayal of Taiwan with facial tattoos. Tattooing was widespread among Polynesian peoples and among certain tribal groups in the Taiwan, Philippines, Borneo, Mentawai Islands, Africa, North America, South America, Mesoamerica, Europe, Japan, Cambodia, New Zealand and Micronesia. Despite some taboos surrounding tattooing, the art continues to be popular in many parts of the world.

A Tattoo Artist is an individual who applies permanent decorative tattoos, often in an established business called a tattoo shop, tattoo studio or tattoo parlour. Tattooists usually learn their craft via an apprenticeship under a trained and experienced mentor.

Artists tend to specialize in certain designs and many have become famous for having celebrity clients and for television appearances on Miami Ink, LA Ink and ink master.

Properly equipped Tattoo studio will use biohazard containers for objects that have come into contact with blood or other bodily fluids; Sharps containers for old needles, and an autoclave for sterilizing tools. Certain jurisdictions also require studios by law to have a sink in the work area supplied with both hot and cold water.

Abstract Tattoos
Abstract tattoos, mostly derived from archaic styles of tattooing, do not involve much artwork. Mostly done in shades of black and classic gray, such tattoos are commonly made around the navel, chest and calves, though the arms and upper back are also emerging as a popular choice. Abstract tattoos include tribal and Celtic styles, Old English lettering, and Chinese symbols.

Naturalistic Tattoos
When an attempt is made to portray the tattoo in a realistic style, it's often in the 'natural' form. The portrayal, involving minute detailing, shading and perspective, is done in such a way that imparts a tattoo design as much realism as possible. With cost a little on the higher side, naturalistic tattoos are more popularly comprised of faces of Native Americans and religious leaders.

Gang tattoos (or sometimes known as "prison tattoos") consist of many symbols and markings. A few well-known gang tattoos are: a pitchfork, a six point star, a swastika, a Devil, and a teardrop/ teardrops.

Tribal Tattoos
Most tribal styles originate from various old tribes like those from Borneo, the Haida, the Native Americans, the Celtic, the Maori and other Polynesian tribes. The shapes and motifs of these tribal tattoos are deeply rooted in the tribe’s mythology and view of the world.

The traditional tattoo artist aims to reflect the social and religious values of the tribe in his tattoo designs. Recurring themes are the rituals of the tribe, the ancestors, the origins of the world and the relationship with the gods.

Dedication Tattoos
Commonly known as "pledges". Involves the use of the sailor-based designs, like the heart and name banner, the anchor with a ship name, and the insignia of a military regiment. Not very popular in present times, they command a reasonable price. This is mainly because they are among the more standard designs offered at a tattoo parlor. 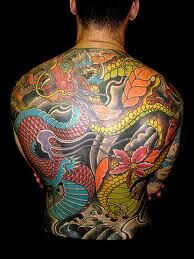 Complex Tattoos
Also known as combination tattoos, they comprise an amalgamation of various tattoos, making them much more impressive than other types of designs. The most popular complex tattoos are comprised of traditional Japanese body suits and combinations of unrelated images.

Artists use an electrically powered tattoo machine in the Tattoo process. The machine moves a solid needle up and down to puncture the skin between 50 and 3,000 times per minute. The needle penetrates the skin by about a millimeter and deposits a drop of insoluble ink into the skin with each puncture.

The tattoo machine has remained relatively unchanged since its invention by Samuel O'Reilly in the late 1800's. O'Reilly based his design on the autographic printer, an engraving machine invented by Thomas Edison. Edison created the printer to engrave hard surfaces. O'Reilly modified Edison's machine by changing the tube system and modifying its rotary-driven electromagnetic oscillating unit to enable the machine to drive the needle.

While tattoos are considered permanent, it is sometimes possible to remove them with laser treatments; typically black and darker colored inks can be removed more completely. An ink trademarked as InfinitInk is designed to be removed in a single laser treatment. The expense and pain of removing tattoos will typically be greater than the expense and pain of applying them. Some jurisdictions will pay for the voluntary removal of gang tattoos. Pre-laser tattoo removal methods include dermabrasion, salabrasion (scrubbing the skin with salt), cryosurgery, and excision, which is sometimes still used along with skin grafts for larger tattoos.

Retrieved from "https://tattoos.fandom.com/wiki/Beginner%27s_Guide_to_Tattoos?oldid=7101"
Community content is available under CC-BY-SA unless otherwise noted.