Tattooing has been practiced for centuries worldwide. The Ainu, the indigenous people of Japan, traditionally wore facial tattoos. Today one can find Berbers of Tamazgha (North Africa), Māori of New Zealand, Arabic people in East-Turkey and Atayal of Taiwan with facial tattoos. Tattooing was widespread among Polynesian peoples and among certain tribal groups in the Taiwan, Philippines, Borneo, Mentawai Islands, Africa, North America, South America, Mesoamerica, Europe, Japan, Cambodia, New Zealand and Micronesia. Despite some taboos surrounding tattooing, the art continues to be popular in many parts of the world. 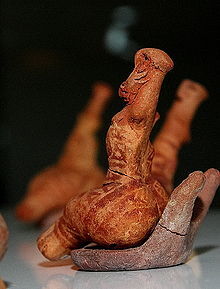 Tattooing has been a Eurasian practice since Neolithic times. "Ötzi the Iceman", dated circa 3300 BC, bearing 57 tattoos: a cross on the inside of the left knee, six straight lines 15 centimeters long above the kidneys and numerous small parallel lines along the lumbar, legs and the ankles, exhibiting possible therapeutic tattoos (treatment of arthritis). Tarim Basin (West China, Xinjiang) revealed several tattooed mummies of a Western (Western Asian/European) physical type. Still relatively unknown (the only current publications in Western languages are those of J P. Mallory and V H. Mair, The Tarim Mummies, London, 2000), some of them could date from the end of the 2nd millennium BC. 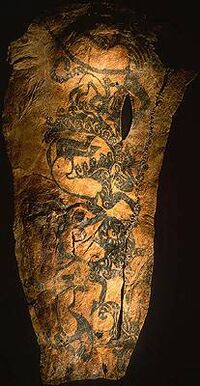 One tattooed Mummy (c. 300 BC) was extracted from the permafrost of Altaï in the second half of the 15th century (the Man of Pazyryk, during the 1940s; one female mummy and one male in Ukok plateau, during the 1990s). Their tattooing involved animal designs carried out in a curvilinear style. The Man of Pazyryk, a Scythian chieftain, is tattooed with an extensive and detailed range of fish, monsters and a series of dots that lined up along the spinal column (lumbar region) and around the right ankle.

Tattooing was popular among many ethnic minorities in China since ancient time. However, among the Han Chinese (the major ethnic group) Tattoo has been associated with barbarians, criminals, gangsters and bandits since at least Zhou Dynasty (1045 BC to 256 BC). Tattooing the chinese character "prisoner" (囚) or other characters on a convict's or slave's face, was a practice until the last dynasty Qing Dynasty (1644 to 1912).

Several Indonesian tribes have a tattoo culture. One notable example is the Dayak people of Kalimantan in Borneo. The most common of Borneo designs are thick black tribal work, which all have different meanings. Nature is the main focus when designing a Borneo Traditional Tattooing such as leaves, animals, fruits, trees and branches.

Pre-Christian Germanic, Celtic and other central and northern European tribes were often heavily tattooed, according to surviving accounts. 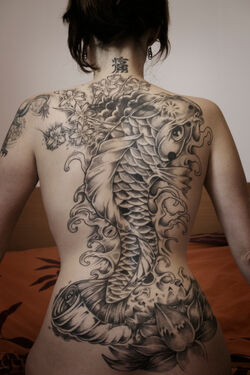 Tattooing for spiritual and decorative purposes in Japan is thought to extend back to at least the Jōmon or paleolithic period (approximately 10,000 BC). Some scholars have suggested that the distinctive cord-marked patterns observed on the faces and bodies of figures dated to that period represent tattoos, but this claim is by no means unanimous. There are similarities, however, between such markings and the tattoo traditions observed in other contemporaneous cultures.

In the following Yayoi period (c. 300 BC–300 AD) tattoo designs were observed and remarked upon by Chinese visitors. Such designs were thought to have spiritual significance as well as functioning as a status symbol.

Starting in the Kofun period (300–600 AD) tattoos began to assume negative connotations. Instead of being used for ritual or status purposes, tattooed marks began to be placed on criminals as a punishment.

An archaic practice in the Middle East involved people cutting themselves and rubbing in ash during a period of mourning after an individual had died. It was a sign of respect for the dead and a symbol of reverence and a sense of the profound loss for the newly departed; and it is surmised that the ash that was rubbed into the self-inflicted wounds came from the actual funeral pyres that were used to cremate bodies. In essence, people were literally carrying with them a reminder of the recently deceased in the form of tattoos created by ash being rubbed into shallow wounds cut or slashed into the body, usually the forearms.

In Persian culture, tattooing, body painting, and body piercing has been around for thousands of years. The statues and stone carvings remained from Achaemenid Empire (550–330 B.C.) prove existence of body piercing and earrings on ancient Persian gods, kings, and even soldiers. The most famous literal document about Persian tattoo goes back to about 800 years ago when Rumi, the famous Persian poet, narrates a story about a man who proudly asks to get a lion tattoo but he changes his mind once he experiences the pain coming out of the tattoo needle..

Retrieved from "https://tattoos.fandom.com/wiki/History_of_Tattoos?oldid=5660"
Community content is available under CC-BY-SA unless otherwise noted.