Pre-Christian Germanic, Celtic and other central and northern European tribes were often heavily tattooed, according to surviving accounts. The Picts were famously scarified with elaborate dark blue woad (or possibly copper for the blue tone) designs. Julius Caesar described these tattoos in Book V of his Gallic Wars (54 BCE).

Ahmad ibn Fadlan also wrote of his encounter with the Scandinavian Rus' tribe in the early 10th century, describing them as tattooed from 'fingernails to neck' with dark blue tree patterns and other figures.&nbsp 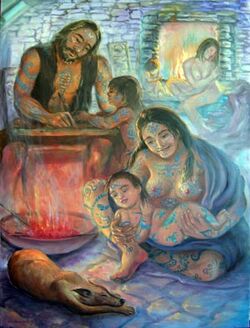 During the gradual process of Christianization in Europe, tattoos were often considered remaining elements of Paganism and generally legally prohibited.

According to Robert Graves in his book The Greek Myths, tattooing was common amongst certain religious groups in the ancient Mediterranean world, which may have contributed to the prohibition of tattooing in Leviticus. However, during the classic Greek period, tattooing was only common among slaves.

Sir Martin Frobisher (1535–1595) on May 31, 1577, set out on his second voyage from Harwich, England with 3 ships and about 120 men to find a northwest passage to China and the promise of gold ore. Frobisher took prisoner a native Inuit man and woman with a child. Upon his return to England, the woman, having tattoos on her chin and forehead, was a great attraction at the court of Elizabeth I. All three died within a month.

In 1691 William Dampier brought to London a native of the western part of New Guinea (now part of Indonesia) who had a tattooed body and became known as the "Painted Prince".

Between 1766 and 1779, Captain James Cook made three voyages to the South Pacific, the last trip ending with Cook's death in Hawaii in February, 1779. When Cook and his men returned home to Europe from their voyages to Polynesia, they told tales of the 'tattooed savages' they had seen. The word "tattoo" itself comes from the Tahitian tatau, and was introduced into the English language by Cook's expedition.

Cook's science officer and expedition botanist, Sir Joseph Banks, returned to England with a tattoo. Banks was a highly regarded member of the English aristocracy and had acquired his position with Cook by putting up what was at the time the princely sum of some ten thousand pounds in the expedition. In turn, Cook brought back with him a tattooed Raiatean man, Omai, whom he presented to King George and the English Court. Many of Cook's men, ordinary seamen and sailors, came back with tattoos, a tradition that would soon become associated with men of the sea in the public's mind and the press of the day. In the process sailors and seamen re-introduced the practice of tattooing in Europe and it spread rapidly to seaports around the globe.

The British Royal Court must have been fascinated with Omai's tattoos, because the future King George V had himself inked with the 'Cross of Jerusalem' when he traveled to the Middle East in 1892. During a visit to Japan he also received a dragon on the forearm from the needles of Hori Chiyo, an acclaimed tattoo master. George's sons, the Dukes of Clarence and York were also tattooed in Japan while serving in the British Admiralty, solidifying what would become a family tradition.

Taking their sartorial lead from the British Court, where Edward VII followed George V's lead in getting tattooed; King Frederick IX of Denmark, the King of Romania, Kaiser Wilhelm II, King Alexander of Yugoslavia and even Tsar Nicholas II of Russia, all sported tattoos. Many of them elaborate and ornate renditions of the Royal Coat of Arms or the Royal Family Crest. King Alfonso XIII of modern Spain also had a tattoo.

Tattooing spread among the upper classes all over Europe in the 19th century, but particularly in Britain where it was estimated in Harmsworth Magazine in 1898 that as many as one in five members of the gentry were tattooed. There, it was not uncommon for members of the social elite to gather in the drawing rooms and libraries of the great country estate homes after dinner and partially disrobe in order to show off their tattoos. Aside from her consort Prince Albert of Saxe-Coburg and Gotha, there are persistent rumours that Queen Victoria had a small tattoo in an undisclosed 'intimate' location; Denmark's king Frederick was filmed showing his tattoos taken as a young sailor. Winston Churchill's mother, Lady Randolph Churchill, had a tattoo of a snake around her wrist, which she covered when the need arose with a specially crafted diamond bracelet. Carrying on the family tradition, Winston Churchill had an anchor tattooed on his forearm.

Retrieved from "https://tattoos.fandom.com/wiki/Tattoos_in_Europe?oldid=7064"
Community content is available under CC-BY-SA unless otherwise noted.