Borneo Traditional Tattooing is a hand tapping style of tattooing with two sticks, developed by some of the ancient tribes of Borneo. 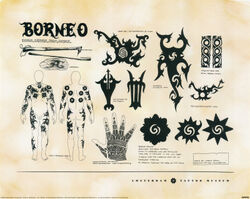 One stick is held onto the skin with the needle or sharp stick going into the skin and the other is used as a type of hammer, tapping ink into the skin. The thickness, durability and type of stick are varied to which the tattooist prefers. Stretching of the skin is very important to the process. Like with the sticks each artist has their own preferred way of having the skin stretched. Stretching is different on each part of the body and the correct stretching reduces the time taken to do that tattoo, considerably. A good assistant doing the stretching can reduce the time a tattoo takes by half.

Women of Borneo also have tattoos, but are of a different style of designs and are placed at different positions from those of men. One of these are bands on the forearms which mark the skills that the women has, such as weaving and cooking. Borneo Men would not marry a woman without these tattoos, because the woman is still a girl and not worth marrying. 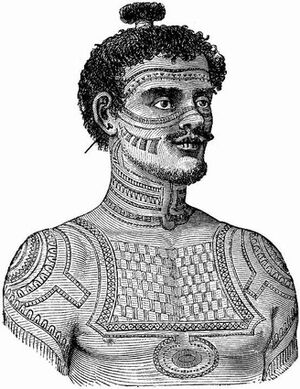 All the tattoos, following the eggplant flower, are like a diary. A young male would go out on his own to find knowledge and from each place he went to he would get one tattoo to mark not only where he is from but also where he has been. From each place the tattoos have different styles so the regional differences in his tattoos would tell the story of his journeys in life.

Borneo tattoos do not just mark physical journeys. Some represent big life events, such as fathering children etc. For example there is a tattoo a man can have done on his hand called the Entegulun. You can only have this if you have taken heads. Some tattoos can be for protection, for example the tattoos on the troat (Ukir Rekong) are meant to give strength to the skin on the throat, to stop your enemies from being able to take your head.

Many of the designs no longer exist. In the 1950s and 1960s many people in Borneo converted to Christianity and a lot of the traditional tattooing stopped. The tattooing and designs almost died away. About 10 years ago there was a resurgence when a lot of journalists and researchers came and asked questions about the old ways. This caused a lot of the younger people to look back and now many of them are getting these traditional tattoos done again.

Retrieved from "https://tattoos.fandom.com/wiki/Tattoos_in_Indonesia?oldid=7066"
Community content is available under CC-BY-SA unless otherwise noted.