When the Samoan Islands were first seen by Europeans in 1722 three Dutch ships commanded by Jacob Roggeveen visited the eastern island known as Manua. A crew member of one of the ships described the natives in these words, “They are friendly in their speech and courteous in their behavior, with no apparent trace of wildness or savagery. They do not paint themselves, as do the natives of some other islands, but on the lower part of the body they wear artfully woven silk tights or knee breeches. They are altogether the most charming and polite natives we have seen in all of the South Seas..." 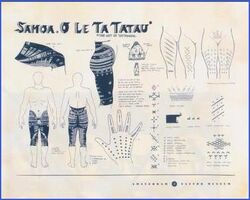 The ships lay at anchor off the islands for several days, but the crews did not venture ashore and didn’t even get close enough to the natives to realize that they were not wearing silk leggings, but their legs were completely covered in tattoos.

In Samoa, the tradition of applying tattoo, or tatau, by hand has been unbroken for over two thousand years. Tools and techniques have changed little. The skill is often passed from father to son, each tattoo artist, or tufuga, learning the craft over many years of serving as his father's apprentice. A young artist-in-training often spent hours, and sometimes days, tapping designs into sand or tree bark using a special tattooing comb, or au. Honoring their tradition, Samoan tattoo artists made this tool from sharpened boar's teeth fastened together with a portion of the turtle shell and to a wooden handle.

Traditional Samoan tattooing of the “pe'a”, body tattoo, is an ordeal that is not lightly undergone. It takes many weeks to complete. The process is very painful and used to be a necessary prerequisite to receiving a matai title; this however is no longer the case. Tattooing was also a very costly procedure.

It was not uncommon for half a dozen boys to be tattooed at the same time, requiring the services of four or more artists. It was not just the men who received tattoos, but the women too; their designs are of a much lighter nature rather than having the large areas of solid dye which are frequently seen in men’s tattoos. The tattooing of women was not nearly as ritualized like men’s were.

Samoan society has long been defined by rank and title, with chiefs (ali'i) and their assistants, known as talking chiefs (tulafale). The tattooing ceremonies for young chiefs, typically conducted at the time of puberty, were part of their ascendance to a leadership role. The permanent marks left by the tattoo artists would forever celebrate their endurance and dedication to cultural traditions. The pain was extreme and the risk of death by infection was a concern; to back down from tattooing was to risk being labeled a “pala'ai” or coward. Those who could not endure the pain and abandoned their tattooing were left incomplete, would be forced to wear their mark of shame throughout their life. This would forever bring shame upon their family so it was avoided at all cost. 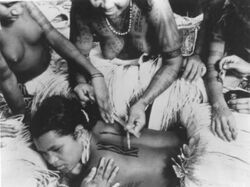 The Samoan tattooing process used a number of tools which remained almost unchanged since their first use. “Autapulu” is a wide tattooing comb used to fill in the large dark areas of the tattoo. “Ausogi'aso tele” is a comb used for making thick lines. “Ausogi'aso laititi” is a comb used for making thin lines. “Aumogo” small comb is used for making small marks. “Sausau” is the mallet is used for striking the combs. It is almost two feet in length and made from the central rib of a coconut palm leaf. “Tuluma” is the pot used for holding the tattooing combs. Ipulama is the cup used for holding the dye. The dye is made from the soot collected from burnt lama nuts. “Tu'I” used to grind up the dye. These tools were primarily made out of animal bones to ensure sharpness.

The tattooing process itself would be 5 sessions, in theory. These 5 sessions would be spread out over 10 days in order for the inflammation to subside. The steps are as follows.

1. O le Taga Tapulu (back and small of the back) In the first session the height to which the tattoo will rise is decided (Ano le Tua), this is always such that the top of the design will show above the lavalava. Then the va'a, pula tama and pula tele are outlined and the design filled in.

3. Taga Tapau The lausae, an area of solid tattooing, is added to the thighs beneath the aso e lua.

4. Taga o Fusi ma Ulumanu The fourth session is the tattooing of the ulumanu, from the center of the thigh up to the inner groin.

5. 'Umaga (the end) The final sessions involves the tattooing of the abdomen, the area that covers the navel being called the pute, and is apparently the most painful part of the whole process. Christian missionaries from the west attempted to purge tattooing among the Samoans, thinking it barbaric and inhumane. Many young Samoans resisted mission schools since they forbade them to wear tattoos. But over time attitudes relaxed toward this cultural tradition and tattooing began to reemerge in Samoan culture. 600px

Retrieved from "https://tattoos.fandom.com/wiki/Tattoos_in_Samoa?oldid=7079"
Community content is available under CC-BY-SA unless otherwise noted.